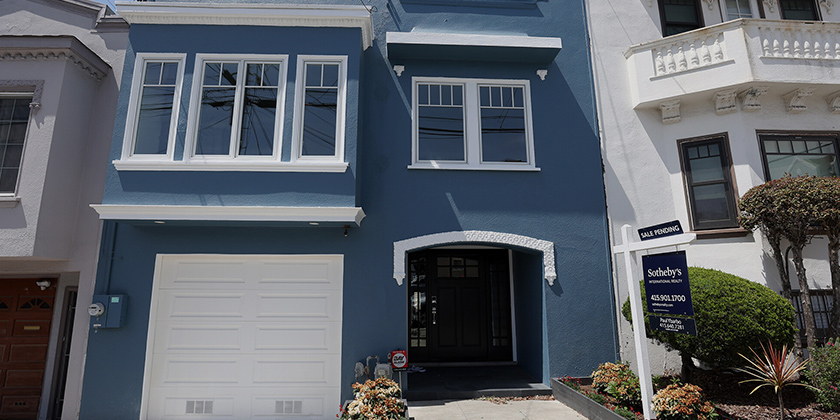 Home sales fell for the third consecutive month in April as rising mortgage rates and affordability challenges pushed many would-be home buyers out of the market. Still, prices continued to climb, reaching an all-time high.

The median price of a home in April was a record $391,200, rising 14.8% from a year ago, according to a report from the National Association of Realtors. While price growth was robust, it was a slower annual pace of increase than in recent months and determined buyers pushed their budgets to the edge to buy a home before mortgage rates climb further.

The price increase marks more than a decade’s worth of consecutive year-over-year increases, the longest-running streak on record.

But as the average rate on a 30-year mortgage crossed over 5% in April, the rising cost of financing a home pushed some prospective home buyers out of the market.

Sales of existing homes, which include single-family homes, townhomes, condominiums, and co-ops, dropped 2.4% from the prior month and 5.9% from a year ago. It was the weakest sales activity since June 2020.”Higher home prices and sharply higher mortgage rates have reduced buyer activity,” said Lawrence Yun, NAR’s chief economist. “It looks like more declines are imminent in the upcoming months, and we’ll likely return to the pre-pandemic home sales activity after the remarkable surge over the past two years.”

While showings of available homes for sale were down in April, according to tracking NAR does with lockboxes, demand among buyers remains strong, said Yun. In April, a typical home sold in a very swift 17 days, and 88% of homes were sold in a month or less.

The number of households interested in becoming homeowners remains high, despite waning confidence that now is a good time to buy,” said Danielle Hale, Realtor.com’s chief economist. “This is especially true among younger home shoppers, who are likely to be first-time buyers and are struggling to save for a down payment as rents continue to hit records.”

Affordability remains a challenge for first-time homebuyers, who comprised just 28% of the market in April. A year ago, they made up 31% of the market.

But not only are record high prices and rising mortgage rates putting a squeeze on home buyers but the persistently low supply of available homes to buy is also still weighing on sales.

Inventory is up but remains low

The inventory of homes for sale ticked up 10% in April from March, but was down 10.4% from a year ago, according to NAR.

“Housing supply has started to improve, albeit at an extremely sluggish pace,” said Yun.
He noted that the current housing market is in a rare state. While home price increases and a low number of days on the market suggest a strong housing market, he said, the sales declines are a sign of weakening.

“Maybe we are moving from an intense market where many homes get multiple offers into a less intense market,” he said. “The transactions are still occurring and occurring quickly if inventory is available.”
Unfortunately, he said, there’s a huge wave of potential inventory that is not being unlocked.

Some homeowners who may have considered selling their homes may be deciding to stay put in part because they refinanced into a very low-interest rate over the past two years. “They don’t want to give up with super-low mortgage rates,” Yun said.

While higher rates are expected to eventually rein in price increases, homeowners are still holding most of the cards.

“Sellers will want to keep on top of a rapidly adjusting market poised for a reset,” said Hale.