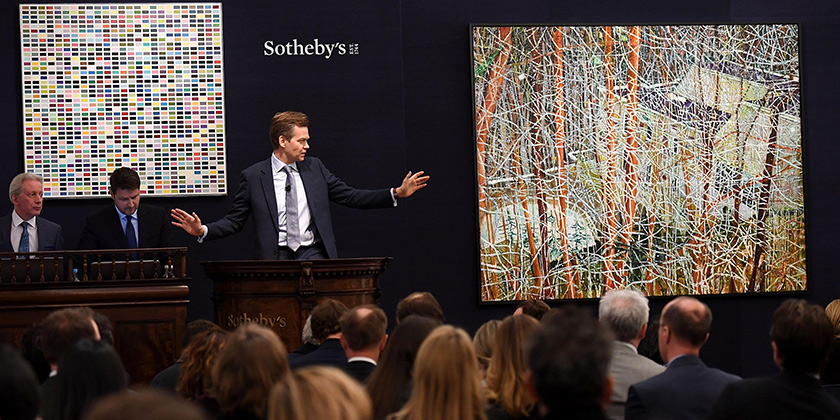 A series of auction records for artists fell in back-to-back sales of contemporary art at Sotheby’s that realized a total of US$283.4 million on Thursday evening in New York.

Animated bidding at Sotheby’s “The Now” auction of ultra-contemporary works, which realized a total of about US$73 million, led to nine artist records and was 100% sold.

Works by Anna Weyant, Christina Quarles, and Simone Leigh —the first three lots of the night—soared beyond estimates, and records were achieved for Lucy Bull, Matthew Wong, Adrian Ghenie, and the late fashion designer Virgil Abloh. Proceeds from the sale of Abloh’s sculpture, Unique “Efflorescence” Desk, 2019, which sold for US$151,200, will benefit a newly established foundation in his name.

A stunning sculpture of a female head carved in ash wood colored cadmium yellow by Georg Baselitz titled Dresdner Frauen – Besuch Aus Prag [Women of Dresden – Visit from Prague], 1990, sold for US$11.2 million, with fees, above a US$4 million high estimate. The result set an auction record for the 84-year-old German painter. Sean Scully’s Song, also achieved an artist auction record, selling for US$2 million, above a US$1.2 million high estimate.

At the Now sale, nearly 60% of 23 works on offer were by female artists, many of whom either saw new auction records or strong results, such as Avery Singer, whose Happening, achieved US$5.3 million, with fees, above a US$3.5 million high estimate. In all, 14 works by these artists realized US$28 million, double the high end of a presale estimate range.

The auction total exceeded expectations of achieving between US$42 million and US$60 million, which included an estimated range of US$6 million to US$8 million for a Banksy that was withdrawn before the sale.

The highest price in the Now auction went to Kerry James Marshall’s Beauty Examined, 1993, which sold for US$13.5 million, with fees, above a US$12 million high estimate.

Beauty Examined was gifted to Loma Linda University in Loma Linda, Calif., by Charles Sims and Nancy Adams-Sims. Bidding for the 84⅝-by-99¼-inch acrylic and collage work, went on for more than five minutes—not uncommon during this sale.

Weyant’s Falling Woman, sold for US$1.62 million, with fees, above a US$200,000 high estimate, to an online bidder. Works by the 27-year-old Canadian artist kicked off three evening sales during marquee auctions the last two weeks, an indication of the artist’s surging popularity.

Other artist auction records for the evening included Matthew Wong’s The Night Watcher, 2018, which sold for US$5.9 million, above a US$2 million high estimate, and Adrian Ghenie’s Degenerate Art, 2016, which sold within an expected estimate range at US$9.3 million.